- April 22, 2018
On this website you'll find new player guides for Dark Age of Camelot.  These guides assume you have played a MMO before, but no familiarity with DAoC at all.   Each guide also includes links to additional useful resources that are still up-to-date with the current game.

When I recently started playing Dark Age of Camelot again, I found the game much improved from what I remembered from my last time there over a decade ago.  Compared to when I previously played (first at launch in 2001, and a few more times in subsequent years) the game is far easier to get into.  You can start a fresh character and hit level 50 in a matter of hours, less than 20 even if you take your time with side-quests.  When you hit the level cap you'll also get a solid set of end-game starter gear for free.

I also found the game to be obscure, in some cases frustratingly so.  A lot of nearly critical systems aren't documented, or in some cases even alluded to, in-game on a normal play through.  In addition to this a good number of websites for the game are badly out of date and/ or or aren't very useful unless you already know a lot of of the game basics.  On my first few characters, I spent almost as much time puzzling things out through web searches, trial and error as actually playing the game.  To save you some of that suffering, and help you find the truly great game buried underneath a steep learning curve, I've put together guides to a few essentials.

PvE Leveling for New Players: The modern game does a good job of holding your hand with easy PvE quest chains that will get you to about level 35.  However, after that the quest chains run out and the little guidance you are given in-game on where to go next isn't very helpful.   This guide contains an easy PvE path from 35 to the cap, info on some optional but rewarding low level side-quests (as well as what side-quests to avoid), and some pointers on new advancement systems that open up at the level cap.

Champion Levels: A guide to champion levels, one of the quickest and easiest ways to get a modest power boost at level 50.  An important system that's not very well documented in-game.

Horses: A guide to the mounts that are available and how to get them.  Another essential system that the game itself doesn't give you many pointers on.

In addition to these guides to the core game, I've also put together full walk throughs for quests that added a lot to my enjoyment of the game once I figured out how to get through them.

How to get Orion's Belt: Running through this guide at level 30 will net you your first artifact (a powerful magic item that gains abilities as you level it) at a low enough level that all of its abilities will still be useful.  In the process you will start in on your first glass quests and learn about several systems you'll use much more heavily at higher levels.

The level 50 Champion Quest series:  This is a long quest chain that I had to split into two posts, part one and part two.   Running though this quest chain on a fresh 50 will give you a huge head start on your champion levels (5+ levels), net you a decent amount of coin, and on Gaheris is also an entertaining way to earn your first few realm ranks.

If and when I decide to add new guides, I'll update this post.  I hope you find these guides helpful.  Happy hunting! 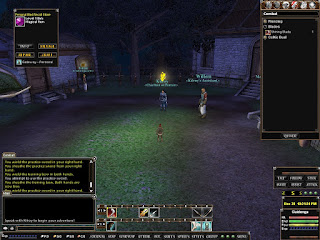 This is a guide to how to get from level 1 to 50 doing PvE in modern Dark Age of Camelot.*  It covers new player basics, an easy solo route from 35 to 50, and some links to get you started as a fresh 50. This guide assumes you'll start out by following the new player experience quest series. In my opinion this is the best progression route for players completely new to DAoC.  You will level fairly quickly and get solid gear as quest rewards along the way.  It's also a stress free way to gradually learn the basic game mechanics.  Unfortunately, those quests run out at around level 35, and the guidance you are given in game on where to go next is pretty useless.  This guide contains one possible leveling route through to 50. The leveling path I've laid out here is designed largely to be pain free for new players getting their feet wet. *This guide covers where to go and what to do, not mechanics or character builds. To figure out what skills to pick as you level, using a c
Read more 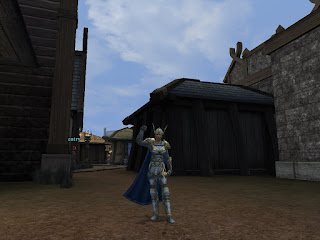 This is a Guide to Champion Levels in modern Dark Age of Camelot. Champion levels are an advancement system that starts once you hit level 50, and talk to the king in your realm's capital city. You can gain up to 15 champion levels. Each level grants additional hit points, power and a champion point you can spend on new abilities.  This guide discusses the various paths for gaining Cxp, the rewards you can expect along the way, and where to train champion level abilities. Starting Out When you first hit level 50, talk to the King in the Kings Throne Room of your capital city to unlock champion levels.  You start off at Champion Level 0.  If you left click click on the label to the left of your XP bar (in the character status summary window, by default in the lower right half of your screen), you can change it from displaying "Exp" to "Chp."  When you mouse over the Chp text it will say "earning X champion level XP" where X is the champion level you
Read more 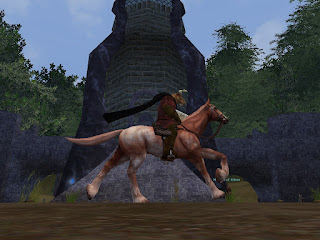 This guide focuses mainly on where to get horses and saddles/ horse armor.  A lot of the information currently available on the web is out of date, and I haven't seen all of this information in one place anywhere else.  You can find pictures of all the mounts available in game on  the official website  , though the the information on what champion levels are needed to equip different sets of horse armor is currently wrong.  Etaew has a  good general guide  to horse mechanics that's definitely worth reading. To use a mount enter "/mount" to open your mount panel, move the horse you want to use from your inventory to the "active" slot of the mount panel, then drag the mount icon from the panel to one of your quickbar slots.  There are two general classes of horse: Standard horses can be used at level ten or higher, grant a 135% runspeed bonus (roughly the same speed as sprinting), can't use saddles or other accessories, and can't be used in the f
Read more